After creating a service, you will have to define servers that will be balanced.

This list is used if you want to link server into a balanced group. 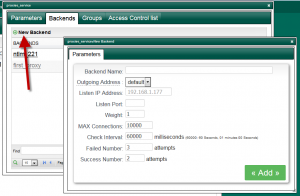